The Council would like to thank everyone who held an event to celebrate both all they do to promote dignity and raise the profile of the Campaign.Several events also resulted in funds being raised for the Charity which was tremendous and means we are able to ensure that resources for Champions remain current and available. What follows is a small selection of the events that took place and some of the information from the day's events. 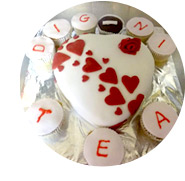 Digni-Tea n Valentine's Day, at Temple Croft Care Home Grimsby, lovely singer, n cakes. Lynsey arranged the afternoon with all the residents writing their leaves for Dignity means to me, Jackie our lovely cook made the cakes, they all looked n tasted gorgeous. 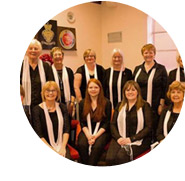 Fabulous afternoon - raising awareness of dignity through our little town of Bridgtown. Digni-tea with the delightful singing of our dear friends the St Stephens gospel choir, and a special mention to our 3 Fivers who gave us a rendition of King of the Road. We made £100 for dignity and £60 for our church restoration fund. There was lots of interest in people wanting to become champions - let's hope we see those numbers increase. What a difference a day makes!!!

Around the world - Walmer Care Centre 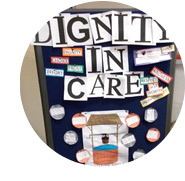 At Iden Manor our residents designed a wishing well and made penny's and put all their wishes on pennies and put them around the well. 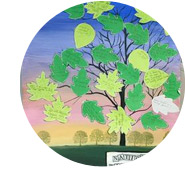 This year for Dignity Action Day the staff and residents at The Moorings Care Home enjoyed an afternoon Digni-tea party to raise awareness of dignity in care. We had a beautiful painting of a tree (painted by one of our staff team) and asked our residents 'what does dignity mean to you'. They wrote their responses on leaves which were then put on our tree. This was a really good activity & showed us what dignity really means to the people we care for. iPads were passed around so the residents could watch a short training clip from the RCN called "How would you feel?" Information leaflets from SCIE regarding dignity in care homes were also distributed. The afternoon was thoroughly enjoyed by everyone; many of our staff have now signed up to be Dignity Champions! 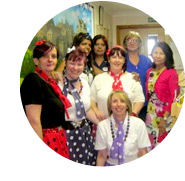 At Southveiw Care Home we like to promote Dignity at all times for Dignity day we had a 50s Style Diner. With the staff and residents dressed in the style of the era with rock and roll outfits. The residents enjoyed milk shakes, hot dogs, doughnuts and fries. Rock and roll music and a raffle in which everyone participated and had a great time. 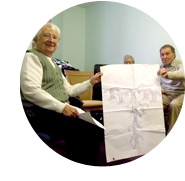 Nutfield House residents were joined by Age UK to celebrate Dignity Day. Everyone was given a paper T to put a message on of what dignity day meant to them, these were then pasted on to our large Digni - T. We then had some very touching poems read out by some brave residents. Everyone then enjoyed tea and cake together. 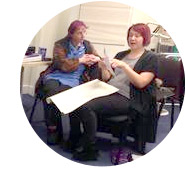 At Complete Care West Yorkshire Ltd we decided to hold a Dignity tri-gameathon. Staff were invited as well as their children to come and play three games. The first Game was Dignity Bingo where words associated with the word Dignity were used to get a line. The next game was Dignity Guess Who? Staff faces were on the wall and staff had to guess which matching face was in the envelope. The last game was a Dignity Quiz with 16 questions.To finish off the day I (Registered Manager) read out a dignity poem written by Emma Hawkins. I then asked the group to split into two teams and come up with something similar. Both teams did amazing, their poems will be put on our facebook site for all to see. The day was a great success and one in which we certainly take part in again.

I am writing from Springfield Garth in Boroughbridge to let you know about our Dignity in Care event.

On Monday 6th February we held a Pamper Day for Residents. We turned one of our lounges in to a salon for the morning. We had the hairdresser, Wet shaves for the gents. A foot Spa, staff did nails and hand massages. Some residents and staff enjoyed an Indian head Massage. We had a really enjoyable morning followed by a lovely hot buffet lunch. After lunch Mr Nigel Rae came along to entertain us with a great selection of sing along songs. We finished off the event with Coffee and Cake.

It was a lovely way for us to remind everyone what dignity is about for residents, staff, family and friends.
Debbie (ILF) 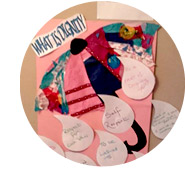 We at West Eaton decided to make an umbrella for our Dignity Day. Our discussion led to poetry. After lunch we are making scones for our cream tea.

Have a fun day.
Rita Graham 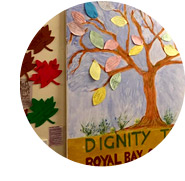 This is our dignity tree which is up all year round so family friends colleagues doctors and nurses , anyone who comes to the royal bay residential home in Bognor Regis can put up their own leaf and express what dignity means to them.We had one resident who wrote on his personal leaf never get caught with your trousers down because he knew it would bring a smile to people's faces which is lovely. On our dignity day we had a vintage tea party with an Elvis impersonator serenading the ladies which went down very well and a great afternoon was had by all, just seeing the smiling faces was a joy to all.

The staff at the John Radcliffe Hospital Oxford celebrated Dignity Action Day and raised funds for the National Dignity Council from cake and badge sales. 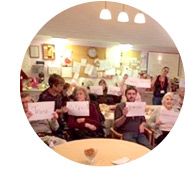 Friends and family were invited to the Hub for afternoon tea and a chance to discuss what dignity and respect meant them as individuals - all helped along by a cuppa (or two) and some lovely cakes. Customers at the Hub were able to talk openly about the support given to them by staff and discuss the importance of being valued as an individual and having their privacy considered at all times. They also wrote down words and sentences that expressed what dignity means to them and these were used to create poems which were read out and enjoyed by everyone at the Digni-tea. A lovely and worthwhile afternoon discussing a subject that matters to us all. 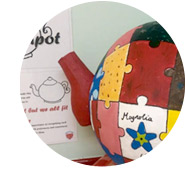 I'm Sue Davies from Magnolia Ward Somerset. I would like to share our recent ward event to promote world Dignity day and to thank everybody who participate in the event and a special thank you to the Ward Activities co-ordinator Hannah Spencer.On Friday 3rd February Magnolia Ward held an 'Afternoon Digni-tea' to mark Dignity Action Day. In the weeks leading up to the event, patients and staff all worked together to build and decorate a 'digni-teapot' as a creative alternative to the 'digni-tree' or dignity memory book ideas suggested by the National Dignity Council. All patients and a selection of staff from all roles each decorated jigsaw pieces drawn onto the giant (32 inch!) paper mache teapot to show that we are all different but we all fit together; emphasising the importance of recognising each person as an individual with preferences and experiences unique to them. On the morning of the event, patients were supported to make four different varieties of cake which were then served as part of 'Afternoon Digni-tea'. A big part of our Dignity Action Day event, and the lead up to it, was encouraging conversation about what dignity means to us all; during 'Afternoon Digni-tea' these ideas were collected into a fantastic visual display with contributions from patients, all staff (all roles) and visitors to the ward including family members, the SUCH project, the chaplain and the Trust's Patient Experience manager - a real inclusive picture of what dignity means to Magnolia Ward.