Dignity Action Day is an annual opportunity for health and social care workers, and members of the public to uphold people's rights to dignity and provide a truly memorable day for people who use care services.

Below are just some of the events that occurred during February 2014 to celebrate Dignity Action Day and the importance of Dignity, Compassion and Respect in our interactions with others.

It has been impossible to include everything that happened, so if you are not mentioned below your contribution was no less valuable, and there are many more stories on the website.

The National Dignity Council would like to express their heartfelt thanks to all those who took the trouble to arrange an event to highlight the principles of Dignity and look forward to hearing stories of how Dignity Action Day was just the beginning of an ongoing change in culture and approach as well as a celebration of what has already been achieved.

Please also view our Memory book page for more of the activities that have happened in 2014.

Service users and staff at a health trust celebrated national Dignity Action Day with a special activity day which illustrated the importance of dignity and respect.

To mark the occasion, service users at Northumberland, Tyne and Wear NHS Foundation Trust, designed invitations to the celebrations which took place at the trust's autism service facility at Northgate Hospital in Morpeth.

Some of the activities included competitions, making posters and baking, and everyone attending was asked to make a dignity pledge which was displayed on the 'Pledge Wall'.

Guests were invited to enjoy snacks made by service users and staff as part of a special 'Digni-tea' party. Other activities on the day included games, dancing, singing, and there was also a raffle.

"Hi-De-Hi!" was the greeting for elderly users of a Keighley day centre. Yellowcoats entertained regulars at Holmewood Resource Centre to tie in with national Dignity Action Day.

The centre's staff dressed up as hosts from the TV sitcom Hi-De-Hi!, which was set in a fictional holiday camp during the 1950s.

Holmewood users, who have dementia, were encouraged to recall their own holiday camp visits during the era.

Staff member Stuart Eldon painted large images of a beach and a Butlins scene, and singer Romano performed songs from the 1950s.

Day centre manager Lyn Dodd said: "A lot of our users went to holiday camps, so it brought lots of smiles to their faces. They laughed at the knobbly knees contest!"

Bradford Council and other organisations marked the occasion with a special event at Keighley Town Hall. Speakers included the Lord Mayor of Bradford, Councillor Khadim Hussain, Paul Smithson from the Alzheimer's Society, and Jean Walker MBE, the co-chairman of Bradford Older People's Partnership. 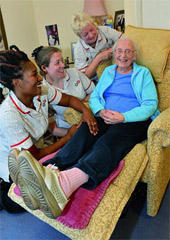 The Orders of StJohn Care Trust's (OSJCT) care homes provided social events and activities to bring the community together, with special Digni-Teas to support the campaign. In Cornmarket Street, Oxford, a Dignity Day event with street theatre took place between 11am and 2pm. continuing in the council chamber at the Town Hall from 2-4pm, with talks from local organisations and from Rodney Bickerstaffe, who is president of the UK National Pensioners' Association.

The Oxfordshire assistant operations director of OSJCT, Patsy Just, said: "We're delighted to be supporting Dignity Action Day and celebrating with each home, as treating our residents with dignity and respect is a key part of the Trust's daily mission.

Care homes up and down the country celebrated Dignity Action Day, which took place on Saturday 1 February.

Dignity Action Day was set up to ensure people, who use care services are treated as individuals, and are given choice, control and a sense of purpose in their daily lives.

The National Dignity Council which coordinates the special day, says 'it is not necessarily a day for the 'grand gesture' but more about taking the time to do something, however small to remind society that dignity in care is everybody's business'.

Dame Joan Bakewell, Dignity in Care ambassador said: "Dignity Action Day highlights a more respectful way of behaving towards vulnerable people. The very old and the very young clearly need our respect, but it wouldn't do any harm to spread the dignity message across the population then we can all benefit."

Events to celebrate the day included Lake Orchard Care Centre in Kelfield, which put on a whole week of events for its 70 residents to choose from, including a lunch, hairdressing and a religious service.

York Older People's Assembly, a forum for over 50s, held an information point at Clements Hall, in Nunthorpe Road to share ideas on how to promote dignity and respect in York.

Langfield care home in Manchester put on a week of events which included a staff 'mad bad hair day'.

A gathering at Hornsey Library highlighted the need for a new "dignity code", setting out minimum standards for the treatment of older people in hospital and in the community.

Dot Gibson, general secretary of the National Pensioners' Convention, which organised the day, said: "Every week we are struck by another headline which reveals the neglect and ill treatment of older people either in their own home, a care home or hospital. This has got to stop."

COUNCILLORS signed a code of conduct pledging to prioritise the dignity of older people in care as part of a drive to make Notts "a good place to grow old".

The code was signed as residents at a Sherwood care home were treated to an afternoon of entertainment to celebrate Dignity Action Day.

The event, which has been taking place annually since 2010, calls for older people to be treated with "respect" by healthcare providers.

On Saturday Abbeyfield's Sycamore House Care Home marked the day by inviting some of Nottingham's dignitaries to give a speech, followed by songs from Clarion Choir, plus an improvisation entertainment act, cake and tea.

The importance of treating patients with dignity was highlighted through interactive displays and information stands at Shropshire's two main hospitals.

The Shrewsbury and Telford Hospital NHS Trust held a week of events at the Royal Shrewsbury and Princess Royal hospitals from Monday to link with national Dignity Action Day.

Graeme Mitchell, associate director of patient quality and experience at the trust, said: "Providing our patients with dignified and compassionate care is of paramount importance to the trust.

"Our staff take great pride in the care they deliver, and we feel it is very important to support the national Dignity Action Day as this helps to raise awareness around some very important issues.

SOCIAL care firms in Staffordshire were urged to support a national event which aims to preserve the dignity of people in care.

Staffordshire County Council has announced its support for Dignity in Care day,

Alan White (the county council's cabinet member for care said: "We want the highest standards of care for people in Staffordshire and we will continue to make this our priority.

"In order to achieve high quality care, dignity must be embedded within all practice.

"Awareness days like this really help to highlight the importance of it."

Here stands our wonderful Dignity Tree,
And all it means to you and me.
Please stop a while and show you care,
And put a thought for all to share.

For when we get old, what is it you see
The child, the worker and our wish to be free?
Or is it a person who's grey, old and frail,
But would still love to tell you their fantastic tales.

So pause for a while, and read all our thoughts,
For Dignity is all that we've sought.
Is it really too much to ask and expect,
To be treated with love and a little respect.

During the day residents were encouraged with staff, friends and family to write a positive thought/comment about their life and activities within the Home on a tree leaf, which was then added to the dignity tree of life display. This is designed to bring together residents, families and staff to celebrate the work being done to promote dignity within the Home. 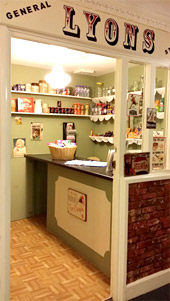 We invited families and friends to afternoon tea, and celebrated on Valentine's Day. We decorated different rooms and offered refreshments, but for residents who have spouses, we decided to do something a little bit special.

Photographs from wedding days were used to personalise Valentine's cards and special messages were placed inside. This idea touched a lot of hearts and made the day a lovely occasion. Everyone received either a rose or chocolates, and photographs were taken and placed into an album for everyone to remember the day by. It was quite an emotional day seeing that even a small gesture of kindness can make such a difference to a person's life.

One of our residents is fast approaching 103 years old and she used to own a sweetshop. We have now opened a similar one next door to her bedroom which has a 1930's feel, scales, cash register and classic sweets. Some of our residents are keen to get behind the counter, and they enjoy this activity very much.

It has been a huge team effort and everyone, from kitchen staff right through to our Manager have all worked hard to come up with ideas and put plans into action. Dignity champions have created boards which hold hands and hearts, one hand for each resident and one heart for each resident. The hands contain 5 points of information special to the individual (one for each finger), and the hearts contain each individuals own definition of the word Dignity. We also have boards which highlight the ten points of Dignity and a photograph for each one has been incorporated.

Several homes based in Kent, recently participated in the Dignity Action Day, an annual opportunity to ensure people who use care services are treated as individuals and are given choice, control and a sense of purpose in their daily lives.

One example was at Barnetts, Tunbridge Wells, the Dignity Café was opened from 10am to 12pm. Here residents, relatives and staff enjoyed a variety of teas (or digni-teas if you like!), coffee and cake in a warm and friendly environment.