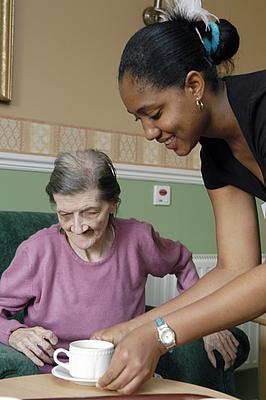 The precise nature of each Dignity Champion's role varies depending on their knowledge and influence and the type of work they are involved in. That role need not be onerous, there are many small things people can do that can have a big impact.

"I have handed out Dignity Challenge Cards to all staff in my care home - each time we have a team meeting we focus on one of the 10 Dignity Challenges and discuss what we can do to meet that challenge. Each meeting results in us making changes to the way we provide care" Dignity Champion - Care Home Manager

Staff and managers can play their part by making changes to the way they deliver services. The SCIE Dignity in Care Practice Guide (opens new window)provides lots of ideas for small changes that staff can make to bring better dignity for those using care services.

MP's and local councillors can make powerful Dignity Champions. As well as being the voice for local people some councillors have a powerful scrutiny role through the Overview and Scrutiny Committee and all can use their positions of influence to encourage local services to promote dignity.

People who use health and social care services, their relatives and carers and members of the public can be powerful Dignity Champions too. Some through formal routes such as being involved in Local Involvement Networks (LINks) and other local action groups

"As an older person activist I have been a champion in the dignity in care campaign for about a year and have worked to promote new champions to sign up to the campaign. As a person who uses services I present at training sessions, workshops etc. "a view from the ground" giving the reasons why I consider this campaign is necessary. Following our presentations we have had a signing up stand which has proved the most profitable way to encourage new champions. We have also shown video podcasts about the campaign at events where possible." Dignity Champion - Older Person's Activist

Others simply by providing feedback on good and bad care. That could be in the form of a thank you note to staff, a posting on a feedback website, a diary blog or where appropriate through formal complaints.

"I was recently in hospital and thought the way I was treated by staff was exceptional. They made a real effort to preserve my dignity at all times. When I recovered I logged on to www.patientopinions.org.uk and NHS Choices and shared my experience of the ward and its staff. Hopefully, their managers were made aware of their good work! I think this could also be a powerful way of making hospitals pay attention to poor experiences of dignity in care - these comments are public so I imagine they are keen to address any negative comments" Dignity Champion - service user

Some members of the public and older people themselves may wish to volunteer in some capacity to do some of the things staff may not always get enough time to do. This could include taking part in befriending schemes or simply calling in on a housebound neighbour for a regular chat.

There are many ways people can take action. Experience isn't important but passion is! Take a look at the Dignity Champions "Toolkit for Action" for ideas of what you can do.

You can find out about initiatives that champions have implemented by taking a look at the recent success stories section where you will find examples of simple initiatives that can make a world of difference that you may be able to take inspiration from to change small things you can affect.

You can also take a look at the Good Practice Framework which is starting to document how more complex good practice initiatives from Health & Social care are implemented.