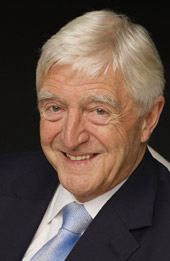 Sir Michael Parkinson, was named as Dignity Ambassador on 20 July 2008 at the launch of the Dignity Tour at Guy's and St Thomas Hospital London.

Sir Michael was approached by the previous Minister for Care Services, to become the National Dignity Ambassador and act as a figurehead for the Dignity in Care Campaign. Sir Michael agreed to help raise the profile of the campaign by bringing it to the attention of the public.

"I am honoured to take on this role as Ambassador for the Dignity In Care Campaign. I have always had immense respect for the contribution older people have made to our country. Like many others I have experienced the care system in the past as the son of elderly parents.

Dignity is about being treated as an individual with respect and compassion. I intend to use my role to make a real difference and ensure the issue of dignity moves to the heart of all NHS and care services."

Whilst acting as the Dignity Ambassador, Sir Michael joined the previous Minister for Care Services on the National Dignity Tour where he has visited different care settings, spoke with champions and users of care services, and the media. He also spoke at several key events and conferences and helped the campaign secure awareness through media coverage.

Sir Michael produced a report published in January 2010 aimed at the public, it higlighted his observations in his time as Dignity Ambassador.

The Dignity in Care Network thanks Sir Michael for everything he has done in his time as the Dignity Ambassador. Sir Michael Parkinson remains one of the 30,000 plus committed Dignity Champions.